At 50 kilometer from the coast of Pahang State, surrounded by the South China Sea, lies the tropical island of Pulau Tioman. Tioman has a reputation, indeed well-earned, as an alluring holiday paradise destination. In fact, so unparalleled are Tioman's beaches that not only CNN and TIME Magazine have published a special about this pearl of an island, but National Geographic has featured Tioman as well. 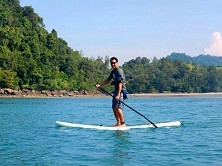 But even before these complimentary articles were published, Tioman was lavished with fame, because in the late 1950s, Pulau Tioman was the location for the Hollywood musical blockbuster, South Pacific. 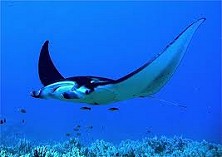 Add to the thriving coral gardens and abundant marina life and it's clear why Tioman scores high on the list of favorite dive spots. Tioman is a veritable dive paradise.

But naturally, snorkelers, too, can revel in the countless species of fish, invertebrates and the turtles and various mammalian species.

Apart from watery adventures, Tioman is an absolutely idyllic spot for leisurely days under the sun with loved ones or friends as well. Partake of Tioman's rugged landscapes and still largely untouched nature. Or drink in a relaxing stroll along one of it's gorgeous beaches. Or be lulled into a blissful stupor by the rhythmic cadence of the surf lapping up against the soft sand. 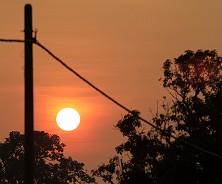 Another day in paradise

Tioman offers six main villages, five of which scattered along its west coast. These are, from north to south, Salang, ABC, Tekek, Paya and Genting. The village of Juara is the sole kampong on Tioman's east coast.

Take the ferry to Tropical Paradise

If, after reading this section, you're interested in Tioman as your next vacation destination, then you'll be pleased to note that getting to Tioman is actually a breeze. Your first destination is Mersing. This quiet port town in Johor State is the jumping board to quite a few islands that dot the Malaysia seaboard. But Tioman's ferry service is by far the most renown. 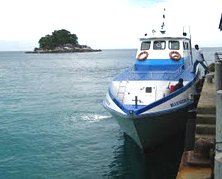 The ferry at Tioman's jetty

NOTE: Mersing ferry departure times to Tioman Island are subject to the river mouth's tidal range. As it happens, the ferry is only able to depart if and when the water level in the river mouth channel is deep enough. To ensure that you have a seat for everyone in your party, reserving your ferry tickets online in advance is highly recommended. The Tioman ferry is strictly seating room only, no standing room. The number of tickets is governed by the number of life-jackets on board of the vessel.

Book your bus to Mersing here!